Along with a visiting friend from India, we were walking down Oak Tree Road the other day when hunger pangs overtook us all. Our Mudaliar friend from India wanted to have a Paratha or a Bajra Roti for a change.

So anon we stepped into Khasiyat in the Sardar Patel Plaza.

Khasiyat has earned a reputation as the go-to place for Parathas. With its 100 types of Parathas, Khasiyat was an obvious choice.

Overall our visit to Khasiyat was a decent road-trip with only an occasional pothole or two.

When we walked into Khasiyat around 1:15 p.m, its tiny, cramped dining room had four or five diners. We were greeted warmly by a turbaned Sikh waiter and promptly shown a table. Yet another smiling waiter brought plastic glasses, a water jug and the menu.

As we were poring over the lengthy list of Parathas, our Mudaliar friend spotted the Today's Special card with Bajra Roti and Baingan Bartha. We immediately placed our order of Khasiyat Special Platter ($12.95), Bajra Roti with Baingan Bartha ($7.99) and Mysore Masala Dosa ($8.25).

No, we did not shortchange our Paratha itch. Khasiyat Special Platter comes with a choice of any Paratha (2 pieces same variety), rice dish and some curries. Whereas Paratha comes only with Raita and Pickle. Since we wanted something substantial, we opted for the Khasiyat Special Platter ($12.95). We chose Alu Gobi Spring Onion Basil Paratha for our platter.

But Boondi Raita was way too sour for our taste buds. Our only grouse with Bajra Roti was it included only two small rotis for $7.99. 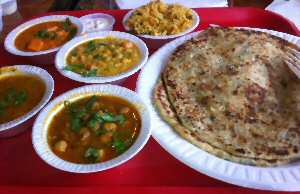 Tasty Parathas, Yummy Paneer Masala
Alu Gobi Spring Onion Basil Paratha was large, came hot to the table. The Parathas were quite tasty to eat as it is and were much relished with the curries that came as sides.

The rice granules in Vegetable Pulao were overcooked and not flavorful.

Paneer Masala was yummy as the spicy gravy seeped well into the soft cubed Paneer.

Channa Masala was another disappointment and tasted as if boiled Channa was added to the gravy as an afterthought rather cooked togther.

Our Order of Mysore Masala Dosa came hot to the table with Coconut Chutney and Sambar accompaniments. 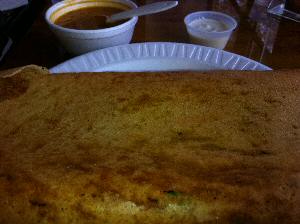 While the Dosa was tasty, we did not relish the accompaniments and the Potato Curry filling much.

Coconut Chutney was way too bland and tasteless.

Ditto with Sambar with no evidence of Toor Dal or Tamarind or Sambar Spices being added. Khasiyat's Sambar tasted like boiled flour water with Red Chilli Powder floating on top.

Potato Curry filling had a slight burnt taste and we pushed the curry aside and ate the Dosa with Paneer Masala and Baingan Bartha that came with our Khasiyat Special Thali and Bajra Roti order.

We were greeted warmly, shown a table within seconds, our order was taken within a few minutes and the food arrived within ten minutes of ordering. No issues at all.

Our food came in disposable plates with plastic spoons and forks and plenty of napkins. Used plates were also removed promptly.

Khasiyat Oak Tree Road Rating - Not for Everyone

By the way, Khasiyat is not for everyone. If you are one of those finicky types expecting to be pampered and looking for a leisurely meal avoid Khasiyat.

For it is a cramped place and serves food in disposable plates and, worse, the greedy swines levy a 12% service charge on all table bills without exceptions.

Notwithstanding our disappointment with some of the curries and the irritation over the compulsory 12% service charge, we may consider revisiting Khasiyat for its tasty Parathas and Bajra Roti. © OakTreeRoad.us