We are no strangers to Rajbhog Foods on Oak Tree Road in Iselin, New Jersey.

Our first visit to this Indian sweets and snacks store was over a decade back during a trip to Oak Tree Road.

The other day we revisited Rajbhog Foods for a quick lunch. 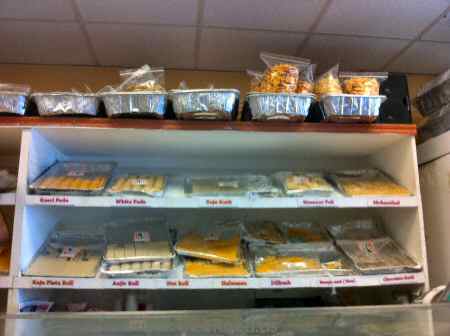 Sweets Counter
As you enter Rajbhog, you have a few tables upfront, and sweets and snacks counters further ahead.

Sweets counter included a variety of Indian sweets from Kaju Katli to Mesoor Pak, Anjeer Rolls and so on.

The combos menu was pasted on the wall, near the cash counter. 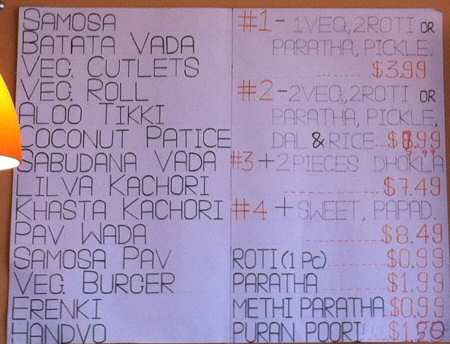 Combos on Menu - Denied
We wanted to order from one of the four "combos" pasted on the menu on the wall.

But the lone waiter in the store refused to accept our combo order, shook his head and rudely responded, "No, No, you order from Chaat."

We decided not to make a fuss and ordered a Samosa Chaat ($4.49) and a pound of assorted Rajbhog Sweets ($11).

Subsequently we added one packet each of Kerala Mix and Channa Dal succumbing to the sales pitch of the waiter.

Here is our take on various items of Rajbhog Foods:

Alas, the Samosa was not well cooked inside, prematurely removed from the frying pan.

Also, the proportion of sauces to the other ingredients like sev and onions had gone wrong leaving an unsatisfying taste in the mouth.

A good Samosa Chat should be both spicy and piquant at the same time. This one was a bit spicy but not piquant enough.

A little more Tamarind Sauce would have done the trick. 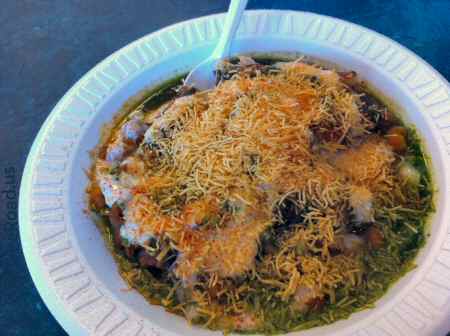 To put it in one word, the $11 per lb Rajbhog Sweets were "Disappointing" overall.

While some were not bad, others packed either a stale or spoiled taste. 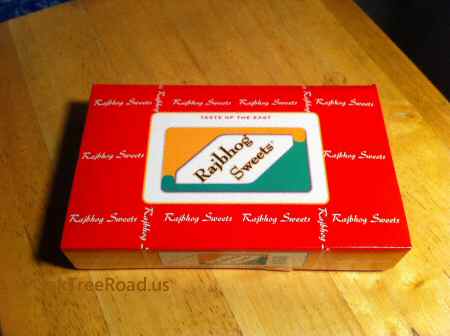 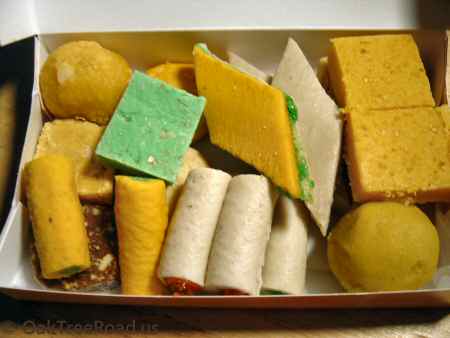 We also picked up Kerala Mix and Channa Dal priced at $1, a discounted offering. 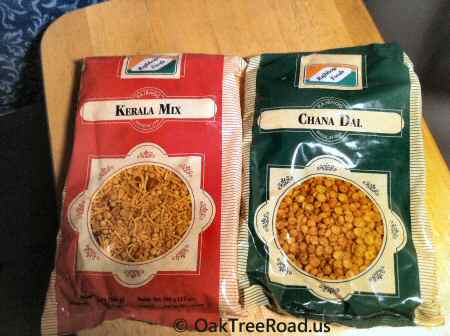 Kerala Mix tasted as if it was prepared during the era of dinosaurs and was stale.

In retrospect, it was not worth paying even a buck for this garbage. Not worth picking up even if it were offered free.

Channa Dal was alright but nothing to get excited about.

At least, it was not stale.

Service at Rajbhog sucks as it is the case in many Indian restaurants on Oak Tree Road.

The cash counter fella either has a hearing problem or just does not give a hoot to customer requests.

While purchasing sweets, we requested him to put only one piece for each of the assorted sweets.

Yet when we opened the Rajbhog assorted sweets box, we found two or more pieces for some varieties.

Also, the waiter was in a grumpy mood and refused to let us order lunch from the menu pasted on the wall without offering any reason.

The place wore the look of a cramped dump with a Frigidaire air-conditioner box hogging a lot of space in the sitting area.

If you crave Indian sweets like we do, steer clear of RajBhog Foods on Oak Tree Road in Iselin.

For much of the sweets we tried belonged in the average or below average category. Some like Motichoor Ladoo were awful.

There is no dearth of Indian sweets stores on Oak Tree Road in Iselin and Edison.

Also, the Samosa in Samosa Chaat was not cooked properly and the proportion of various sauces had gone awry.

It's unlikely we'll be returning any time soon to Rajbhog in Iselin. - © OakTreeRoad.us